The Effects of Metal Deformation on Gears

When we think about metal, it's hard to believe that it's compressible, let alone that it can recover after being compressed, much like a spring.

The ratio of stress to strain, often known as the tensile elastic modulus or Young's modulus, is a straightforward way to express a material's elasticity. 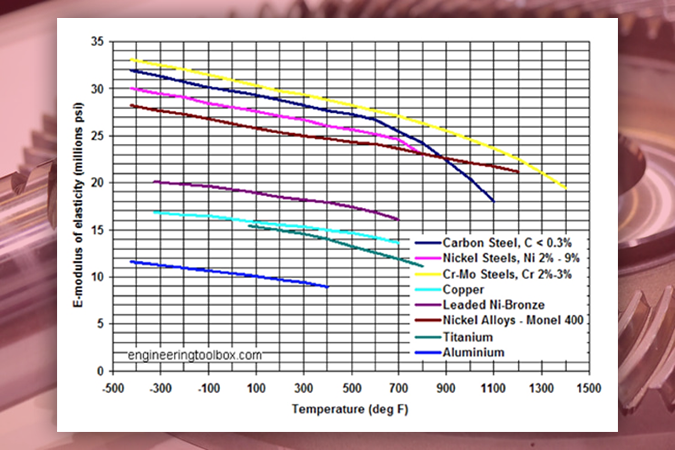 Young's Modulus also known as the Modulus of Elasticity or the Tensile Modulus, is a measure of the stiffness of a material. It is used to describe the elastic properties of materials when they are stretched or compressed. Young's modulus can be used to predict the elongation or compression of an object.

Pressure-induced viscosity has a larger potential to trap and hold pollutants in the contact zone. Rolling bearings can be harmed by the ingestion of SiO2 and other pollutants. Extreme impact pressures can be caused by certain sizes of hard abrasive particles entering the contact zone. The jamming action of these particles may cause ligament collapse, leading to low-cycle fatigue. 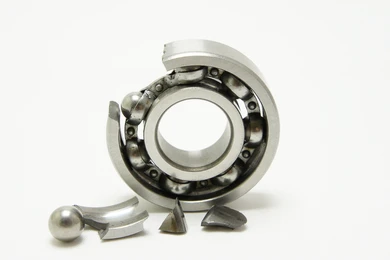 Contaminants come in a variety of forms. Hard particles (silica), bauxite, wear debris (surface fatigue, cutting wear, flakes), and soft particles are all examples of these (fibers, polymers, cellulose). Within the machine, water and caustic substances can be swallowed or created. The softer material is usually damaged by three-body sliding, indentation, or cutting wear caused by hard, abrasive impurities.

If cost-effective, a filter with a ßh0/5 rating of 75 or higher should be specified. A beta ratio of ßx = 75 indicates that only one out of every 75 particles of size x or larger arriving at the filter is allowed to pass. The crucial particle sizes are those with the same diameters as the minimal separation.

Bearings with conformal interaction surfaces, such as plain, journal, sleeve, and shell bearings, as well as piston rings and bushes, all support machinery moving components. Rolling element bearings have nonconformal contact surfaces with rolling motion at the interfaces. Even if proper lubrication and operating conditions are painstakingly maintained, rolling element bearings will eventually fail caused by fatigue which is brought by subsurface voids, fissures, or inclusions. 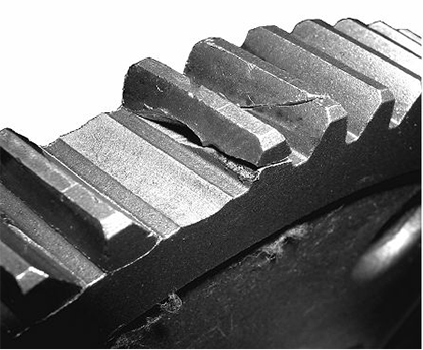 Sliding/rolling contact with pure rolling at the pitch lines best describes the kinematics of an involute gear meshing pair. Sliding is at its most extreme at the start of the engagement, moving toward the gear's pitch line and away from the pinion's pitch line. The rolling bearing spalling and gear pitch line spalling phenomena have a striking resemblance.

Gears frequently fail as a result of normal wear and tear from use or maintenance. Without regular maintenance, care, and replacement, components in any piece of equipment will wear down and finally fail. The eight most prevalent causes of gear failure, as well as what you can do to avoid them, are listed below.

Gear failure is caused by moderate wear due to contact patterns that favor the dedendum and addendum zones. Repeated usage of the gear causes this damage, which is almost unavoidable. By maintaining your gearbox adequately oiled, you can limit the damage caused by moderate wear and tear. It's also a good idea to schedule regular checks to spot potential contact damage early. Contamination of the lubricant might also cause contact patterns to differ from those intended. Make sure your lubricant is of good quality and free of contaminants.

Excessive wear is caused by little damage that is never treated, resulting in recurring issues. Pitting occurs as a result of this wear on the gear's surfaces. Pitting produces vibration in the gearbox, increasing noise and causing gear breakage. This problem could eventually lead to complete device breakdown. The easiest method to avoid excessive wear and tear on your gear is to solve minor concerns as soon as they arise, rather than waiting until they become major difficulties.

Contact wear is identified by radial scratch grooves and other signs caused by abrasive wear. When the lubrication is polluted, abrasive wear and tear occur, similar to moderate wear. Abrasions on the gear surfaces are caused by the lubrication, which can result in increased noise, reduced efficiency, and potentially gearbox failure. By replenishing lubrication and keeping it clean, this type of gear damage can be avoided. To catch foreign bodies like rust and other metal particulates before they enter the gears and cause failure, you should employ a filter.

Corrosive wear is a sort of chemical breakdown that can lead to the failure of gears. When lubricants degrade, the chemical residue left behind eats away at the metal in gears, causing corrosion. Corrosive wear usually appears as fine, consistent pitting over a gear's surface. The use of modern lubricants that prevent oil from breaking down can help to prevent corrosion.

Gear deformation is a common cause of machinery failure. Gear deformation can be caused by a variety of factors, but the most prevalent is wear. Any component within the machine will deteriorate over time due to frequent operation. It can have a negative impact on the equipment's operation if it happens with gears.

Critical wear occurs when a small amount of material is scraped away from the tooth surface of a gear. The gear can no longer be meshed correctly if the wear grows to the point where the tooth profile loses its shape. Pitting, case crushing, and tooth spalling are all examples of surface fatigue. If critical wear or progressive pitting occurs on the tooth surface, the following phenomena occur:

Wear-related gear failures can occur for a variety of causes. The following are some of the most typical reasons for gear deformation: 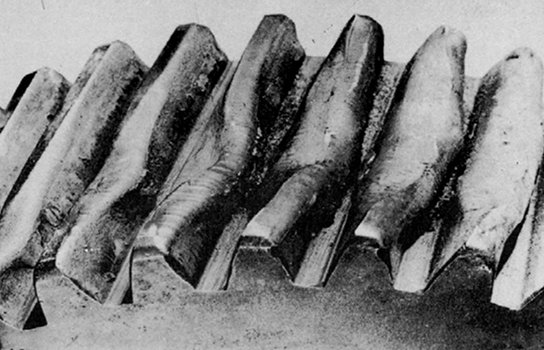 A slow, cumulative failure caused by repetitive loading is a prevalent type of failure. There are three steps to it:

A fatigue crack leaves a sequence of "beach marks" that correlate to where the fracture stopped as it propagates. The crack's origin is frequently encircled by multiple concentric curving beach marks.

The most common types of surface fatigue are macro-pitting and micro-pitting. Macropitting occurs when fatigue cracks start either at or below the surface. Micro-pitting has a frosted, matte, or gray stained appearance. Metallurgical sections through these pits show fatigue cracks that may extend deeper than the pits.

Surface wear on gear teeth occurs when the material is removed or displaced as a result of mechanical, chemical, or electrical action. Adhesion, abrasion, and polishing are the three major forms of wear. The transfer of material from one tooth to another owing to welding and tearing is known as adhesion. Contaminants in the lubricant including sand, scale, rust, machining chips, grinding dust, weld splatter, and wear debris induce abrasion.

Metal is transferred from one tooth to another through adhesion or scuffing. It usually appears in bands along the sliding direction in the addendum or dedendum. Scuffing is a non-progressive condition that ranges from mild to severe. It can be progressive if the operating conditions do not alter. 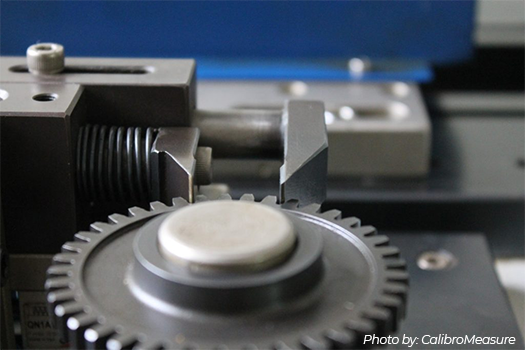 Gear geometry data acquired before aids in determining tooth contact stress, bending stress, lubricant film thickness, and gear tooth contact temperature for each gear. For spur and helical gears, these values are computed using ANSI/AGMA 2001-B88. The danger of macro-pitting, bending fatigue, and scuffing can be determined by comparing these estimated values to AGMA acceptable values.

Then conduct the following destructive tests to evaluate material and heat treatment: 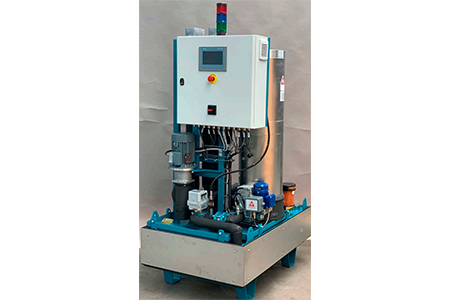 The CJC® GFU's flushing capacity cuts cleaning time to the bare minimum while maximizing efficiency. This enables the highest possible production output. Users will benefit from the lowest possible running cost on the market and lengthy mean time intervals between maintenance by using the CJC® Gear Flushing insert, GFi, which has a very high dirt retaining capacity. 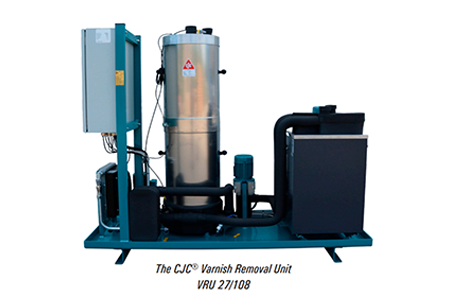