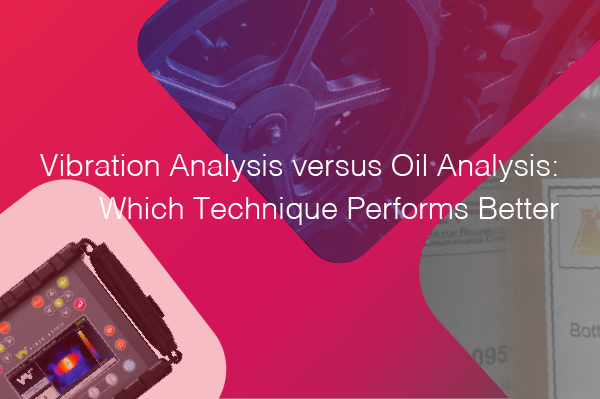 Vibration and oil analysis have been in the Philippine industry for a while.

While some reliability and maintenance professionals prefer one technique over the other, it is important to understand their strengths and weaknesses and their most appropriate applications to know when and how to use them.

Many believe that vibration analysis is the best technique to use to detect machine failure. It can also detect the degree of failure severity and validate a newly adjusted machine.

Vibration analysis makes use of vibration analysis tools to be able to conduct non-invasive testing which means you don't have to open a machine to know what is going on inside which allows for the prompt implementation of improvements. With vibration analysis, you can monitor alignment, foundation conditions, balance quality, and other persistent machine problems.

Just like vibration analysis, oil analysis has various test parameters you can use to detect the degree of severity and condition of lubrication-related problems. The most common oil analysis test parameters done in the laboratories are viscosity, nitration, oxidation, particle count, acid number, and machine wear analysis. Bear in mind that water contamination issues need urgent action as it hastens the oxidation process and increases metal-to-metal contact.

A manufacturing plant that produces vegetable proteins in South America had machines that were situated outdoors which made them vulnerable to the harmful elements of the environment. The effects of these elements were visible in the oil analysis results from the get-go. Due to the presence of water contamination, they found out that machine wear started increasing as shown by the increase in the level of iron and chromium content in the oil samples. There were signals that wear is already happening in the bearing but there is no onset of vibration signal that states otherwise. It was not until a month later that the vibration result indicates shaft bearing failure. The maintenance personnel decided to stop the operation and conducted machine intervention. They replaced the damaged bearing and change the oil. Seeing the advantage of using the two technologies, the plant regularly conducts routine inspections using both technologies.

When Palo Verde Nuclear Generating Station in Arizona implemented a transformative change in their approach to condition monitoring, their assessment showed that oil analysis was able to detect 40% of the bearing defects, vibration detected 33%, and when both technologies were used 27%of the defects were found. Monash University also conducted research in the correlation between oil analysis and vibration and found that the correlation was generally good, however, there are cases when one technique detects fault earlier than the other. For example, when there is a formation of sliding wear, oil analysis registers an increase in wear generation while vibration does not register any signal. As sliding wear generation increases the surfaces are slowly honed which results in looseness. This explains why vibration reduces as sliding wear formation increases. On the other hand, when a gear tooth fractures and when it is too large wear particle analysis is ineffective. This is because the debris finds its way into the bottom of the sump and eventually undergoes oxidization and leeches into the oil which could take months to complete. In this case, employing vibration analysis works early compared to oil analysis.

Oil Analysis versus Vibration Analysis: Two Techniques are Better Than One

To sum it up, both techniques are crucial to achieving reliability in order to get a holistic perspective on the condition of your machine. There have been many cases wherein both technologies were applied and were found to be complementary with each other. However, in cases of unbalance and misalignment, vibration analysis is a better technique for early detection. Likewise, contamination and oil degradation are easily detected through oil analysis.