ISO Cleanliness Code is a three-digit number that is used to indicate particle contamination in oil. ISO 4406:99 is the worldwide standard for reporting contamination. Within a 1 ml sample, a laser is used to count particles of varying sizes, which are then reported in three numbers.

In the lubrication and analysis industry, too much emphasis is placed on the ISO cleanliness code; some laboratories have begun to provide solely the ISO code value, and the end-user places a high level of trust on this number. When it comes to analyzing used oil sample data, it is important to note that the ISO code is only one of the many pieces of the puzzle; it is also important to look at other parameters to get a good look at the status of your machine.

How ISO Cleanliness Code is Determined

Particles are counted in APC using either laser or pore blockage techniques. Various laboratories may report varying particle count micron values. A lab report, for example, may indicate values larger than 4, 6, 10, 14, 21, 38, 70, and 100 microns.

The reporting standard for fluid cleanliness is ISO 4406:99. A code number is issued which has three distinct micron levels: the number of particles larger than 4 microns, greater than 6 microns, and greater than 14 microns. Without seeing the raw data, the ISO code can only determine if a sample has met the intended target value. Unless the value of the raw data at the provided micron levels changes enough to raise or reduce the ISO code, the ISO code offers nothing to assist establish any genuine trend information.

It is completely conceivable and advised to have a goal cleanliness level of 16/13 or better for high-process critical gearboxes, but it is also totally appropriate for other gearboxes in the facility to have looser objectives. This allows us to focus our efforts on the most important components while also improving the dependability of our less critical applications.

Many industrial plants have gone through some sort of equipment criticality evaluation. Criticality ratings can be assigned in a variety of ways. Selecting acceptable target cleanliness levels should be rather similar across the board as long as the site fully understands the level of criticality allocated.

A typical strategy in many facilities and contamination control programs is to give a "blanket" goal cleanliness level based only on component type. Assigning target cleanliness levels in this way is clearly incompatible with the concept of component-specific goals. The use of a 16/13 goal cleanliness grade for industrial gearboxes shows that a desire for a "very clean" status is widespread.

It is fully feasible for some equipment to be considered critical in nature simply due to component replacement cost, labor charges, etc., yet not be so critical as it relates to the overall process.  Equipment that falls in this category may very easily function at what would be a “clean” level or a target of 18/15.  Arguably, it is much easier to achieve and maintain a cleanliness level of 18/15 than it is to achieve and maintain a 16/13 cleanliness level. 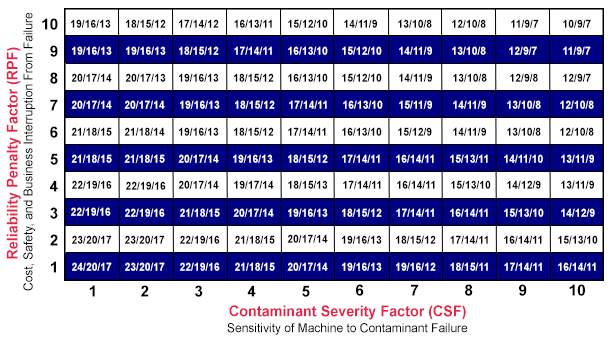 What is the significance of cleanliness? The explanation is simple: competition. Maintaining a precise degree of dependability and uptime is vital to make costs affordable in such a globally competitive industry, where items might be made and transported from elsewhere at a cheaper cost. Contaminant-free lubricants and components will boost the overall dependability of the equipment by extending their lifetime. The higher is the degree of reliability of your business, the more competitive you are in the market.